Recruiters Head to Head Battle - The Winner is.....

Published over 5 years ago by Elkie Holland

England managed to take the lead in the last few weeks after their atrocious start.  Was that tactical play lulling Australia into a false sense of victory ?

It is apparent that neither England nor Australia reached the minimum aspirational target level (bottom red line).

What can we learn from this ?

What did England and Australia really learn .....

Do  not set competition parameters whilst under the influence of copious amounts of alcohol with inflated opinions of their superhuman abilities mixed with huge ego levels !!

England and Australia are happy to laugh publicly about the affect alcohol can have on egos and the wisdom of alcohol and business ! 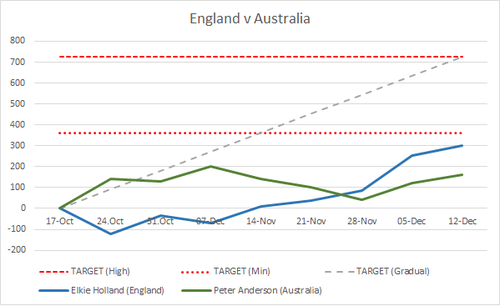